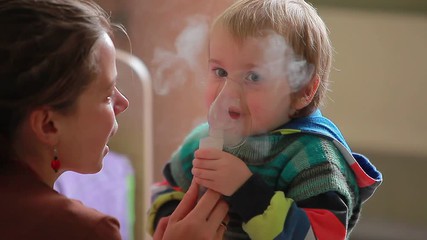 In the second part of our series on CF (click here for Part 1), Dr Rossa Brugha fills us in on how to handle common issues that bring CF patients to the Emergency Department… 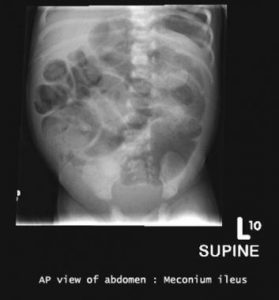 This is bowel obstruction secondary to thick, sticky meconium that won’t move down the colon. It hopefully won’t present to PED, but might do if the baby was born at home. It might be picked up on antenatal ultrasound. The signs and symptoms are neonatal bowel obstruction, with vomiting, abdominal distension, and failure to pass meconium in the first 24 hours. Approximately 90% of cases of meconium ileus are in babies with CF. When it’s removed in theatre, the meconium is thick and squidgy like chewing gum that has been chewed for about 4 hours. Extraordinary.

Babies are hard to feed. It’s a design flaw. They cry, they puke, they refuse breastfeeds,

breastfeeding hurts, they get jaundice, they poo all the time, they don’t poo for days. Now add on top of this a diagnosis of CF, and try to get tiny scoops of creon granules on a spoon (stuck to some apple puree) into your baby each time they breastfeed, on the basis of how much they’ve fed, when no-one has any idea how much milk the baby has taken. What a fun start to parenthood.

If a parent in this situation turns up in PED, give them a hug, a cup of tea, give their baby to a student to take away for a walk for 5 minutes, and bring tissues. Then weigh the baby, and look at the photos of the poo that the parents will have on their phones, and call the CF nurses or SpR on call at your local CF centre. Reflux is disproportionately common in babies with CF (and proton pump inhibitors help creon absorption). Creon dosing in newborns is a dark art, worked out on the basis of units of lipase/kg, what the poo looks like, dietician’s intuition, the baby’s weight gain, and luck.

Bronchiolitis presents in the same way in CF as in other infants, but it makes people nervous as it lasts much longer (weeks) and there’s a concern that intercurrent RSV infection increases the risk of infection with Pseudomonas aeruginosa (although a recent study showed no effect of palivizumab on Pseudomonas infection in children with CF). Treatment of bronchiolitis is broadly similar compared to non-CF babies except for 2 points. First, tell the CF centre the child has bronchiolitis and second, expect them to suggest oral antibiotics. Yes, oral antibiotics for bronchiolitis. Read on as I extrapolate from in vitro data in order to try and justify this….

In a co-infection model on healthy human ciliated epithelium, RSV interacts directly with Streptococcus pneumoniae to make it more virulent. Some mice also died. The dry, sticky CF airway is already at greater risk as it’s easier for bacteria to adhere to the epithelium, and ciliary clearance is impaired. If a child with CF has a cold, we prefer to give them antibiotics in order to decrease the risk of secondary bacterial infection. This may cause harm to some patients in terms of antibiotic side effects and may be detrimental to a healthy, diverse pulmonary and gut microbiota, but the consensus view is that the is the best approach, extrapolated from studies of long term prophylaxis (although these were designed to answer a different question). We recommend amoxicillin-clavulanic acid (co-amoxiclav, Augmentin) as a first line, for a minimum of two weeks, in which the second week should be symptom free, and azithromycin as second line. Often this will be organised by faxing a prescription request to the child’s GP after the parents call the CF nurses/Respiratory SpR, but don’t be perturbed if a parent turns up in A+E asking for antibiotics for a cold – and call your CF centre for guidance on what to give as they may have recent microbiology results to guide antibiotic choices (children get a cough swab or sputum culture every 2 months in clinic).

If a child with CF arrives with new onset shortness of breath or chest pain, get a chest X-ray as they might have a pneumothorax. That’s the only take home message for today.

If they arrive feeling rubbish, with a productive cough, crackles, no appetite, weight loss, and looking terrible then get in touch with your CF centre as they’re likely to need an admission for IV antibiotics for their chest exacerbation. They may have tachypnoea, low sats, and a fall in lung function – try and get spirometry (or a peak flow reading) if you have access to this. If they are wheezy, or fulfil the diagnostic criteria, we might consider a diagnosis of allergic broncho-pulmonary aspergillosis (ABPA). This is an allergic reaction to inhaled aspergillus spores, and treatment is focused on the trigger (antifungals e.g. intraconazole) and the problem (misbehaving T-cells are treated with steroids).

Abdo pain is very common in CF. Reflux/epigastric pain is common, but usually well controlled on a proton pump inhibitor. More troublesome is constipation and lower abdominal pain, with or without “distal intestinal obstruction 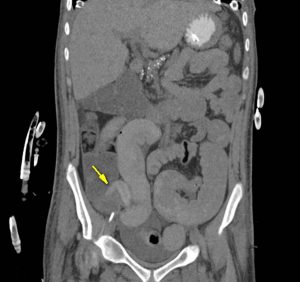 syndrome” (DIOS). DIOS describes the clinical picture of a sticky lump of viscous faeces and mucous causing partial or complete blockage of the bowel, often around the terminal ileum. The child may have diarrhoea, or obstruction, with colicky abdominal pains, including right iliac fossa pain and possibly a palpable lump in the right iliac fossa – a difficult differential diagnosis that includes appendicitis, or adhesions from previous bowel surgery (e.g. neonatal meconium ileus). Treatment is hydration – oral unless they’re vomiting, in which case iv fluids – and softening up the lump (with movicol, oral gastrografin, or in severe cases with a macrogol such as Klean-prep). Speak to your local CF team, as severe cases may need transfer across. 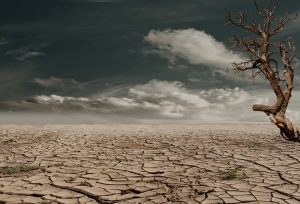 The skin is a big organ, so these children can lose lots of fluid and salt across the skin – particularly in hot weather. Extra fluids and salts are very important in CF. If excess chloride is lost across the skin, it is accompanied by sodium, at which point the kidneys get upset and do whatever they can to conserve sodium by increasing reabsorption of Na+ cations in the distal collecting tubule. Unfortunately, this is done at the expense of potassium and hydrogen ions, which results in (*checks internet, checks textbook, coughs*) a hypochloraemic, hypokalaemic metabolic alkalosis. This is pseudo-Bartters syndrome.

If any baby comes in looking unwell you’re going to do a blood gas – if you don’t you might enjoy a 5 minute sit down with yourself and a cup of tea before dealing with an angry A+E nurse – and this is one of the reasons you do that blood gas. Weigh the baby.

Treatment is dioralyte – this is paediatrics after all – and they might need an NG tube. If severe then iv fluids are indicated but you need to be very careful, because although the kidney has made a bit of an error, the gut and kidney are better at fluid balance than me and you with our smartphone apps and calculators.

Blood! Coming out of my patient’s mouth. Airway, breathing, circulation. Unless something obvious has happened (such as trauma), then you have to worry about either haemoptysis or haematemesis.

Small episodes of haemoptysis in CF are more common towards late teenage years, and probably represent infection eroding small blood vessels in the airway epithelium – these events need antibiotic cover to be considered, 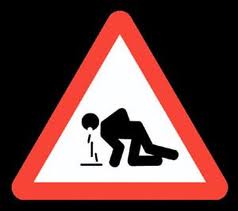 especially if there is a history of Staphylococcus aureus infection. If they have a long-term indwelling venous catheter (a Portacath) then consider pulmonary embolism and try to get an ultrasound of the line tip.

Big episodes of haemoptysis are rare and treatment involves oxygen, stop NSAIDs, give tranexamic acid and adapt the child’s physiotherapy regime for a few days. Massive haemoptysis is managed with IV vasopressin, direct tamponade of the bleeding point via rigid bronchoscopy, or bronchial artery embolisation.

Haematemesis is not good. For this, and other great insights, keep reading. 20 to 30% of patients with CF have CF liver disease, which is a spectrum of hepatic steatosis, nodular changes with fibrosis, and cirrhosis. Portal hypertension is a common feature of CF liver disease, and these patients may have oesophageal varices, which if they bleed, are bad news. Give fluids, blood, and call the liver team, who may want you to start iv octreotide or insert a Sengstaken-Blakemore tube in order to tamponade the bleeding.

What happens to your patient when they are transferred to a CF centre?

Easy – they get a long line, 2 weeks of IV antibiotics, we have an MDT and then the physiotherapists do all the hard work. Come join our specialty.

Cystic fibrosis is a rapidly changing disease with new treatments recently introduced, and the promise of more on the horizon. To provide good CF care as a doctor you need an understanding of physiology, pathophysiology, genetics, infection, inflammation, psychology of chronic disease, pharmacology, know how antibiotics actually work, try to understand health economics, and have an ability to use expensive telescopes to squirt salt water into children’s lungs. Most importantly, do what the CF nurses say. Call your local team if you see a CF patient and you want a chat, and have a look at the guidelines here.

Have you been inspired to write something for PaediatricFOAM? Get in touch with us and join the team! Support, guidance and consultant input will be provided. 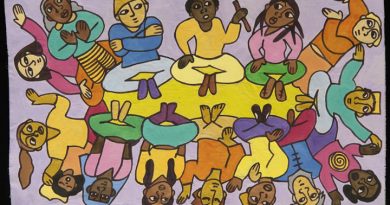 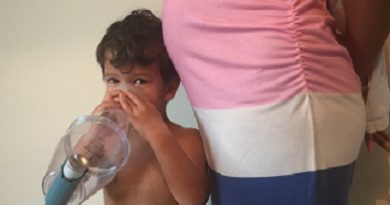 Low maternal vitamin D, childhood asthma and wheeze: Is there a link? 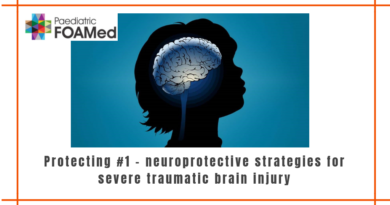 One thought on “Cystic Fibrosis Part 2: CF in the Paediatric ED”