Starting life with your guts where your lungs should be is not ideal, to put it mildly. Babies with a congenital diaphragmatic hernia have a surgical problem with major medical consequences that need to be managed carefully before surgeons can even think about rearranging the anatomy.

CDH occurs in 1 in 2,500 live births, with no particular preference for sex or race. Left sided, posterolateral CDH (’Bochdalek’ hernia) is the most common, 85% of the time – the other less common types are hiatus hernia (where there is a large opening around the oesophagus), and anterior hernia (‘Morgagni’ hernia). Bilateral diaphragmatic hernia is hardly ever seen – babies with this will not survive outside the womb.

In a developing fetus, the diaphragm develops from four different structures growing towards each other and fusing at around 8-10 weeks of fetal life. 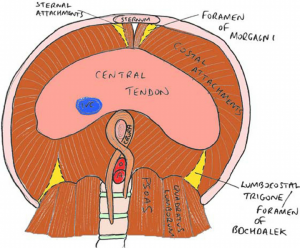 The most important structure is the septum transversum, which folds underneath the heart and picks up nerves from C3-5 (which are dragged down as the diaphragm grows, to become the phrenic nerve). Myoblasts invade the structure as it grows, so in time it becomes muscular.

The septum transversum merges with tissues that go on to form the pleura and peritoneum – knowing these tissues are all so closely related makes it logical that any faults in the development of the diaphragm are likely to affect the function of the lungs and the gut.

When the diaphragm does not fuse on schedule in CDH, the abdominal organs can herniate. This herniation coincides with the pseudoglandular stage of lung development – the stage at which the whole air-conducting bronchial tree is formed (so, kind of important). Oh, and it’s also when the first type II pneumocytes – those that will at a later stage secrete surfactant – appear.

So what happens if the lungs are squashed during this crucial stage? Fewer bronchial branches, fewer arterial generations, and fewer alveoli are formed; basically the lungs are underdeveloped and extremely immature both macroscopically and microscopically. The earlier the herniation happens, the worse the effect on lung development – so when a CDH is picked up on an anomaly scan at 18-21 weeks, you can be sure the lungs will be incredibly hypoplastic. The pulmonary hypoplasia is worst on the side of the hernia, although both lungs can be abnormal.

When a baby is born with an undiagnosed CDH, they might present with respiratory distress and cyanosis (this can happen within minutes of birth or some hours later – but it is also possible for cases to be diagnosed much later than this). Paradoxically, the ‘undiagnosed’ CDHs that are picked up after birth, typically after someone orders an X-ray on that tachypnoeic baby on postnatal ward, are much more stable. Small CDHs that were not seen on antenatal scan might cause everyone a lot of anxiety, but in fact the lungs are much less hypoplastic so these babies tend not to get into such severe difficulty right away. 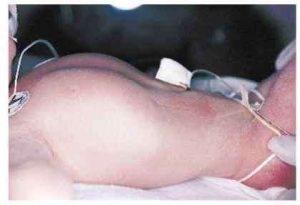 When CDH is picked up on antenatal scans, the delivery and immediate neonatal care can be planned in advance, to be as smooth as possible.

Obviously, babies with known CDH need to be delivered in a unit which is able to provide high level neonatal intensive care and neonatal surgery (or transferred very quickly across if the baby has other plans and makes an early unplanned entrance into the world!)

Antenatal diagnosis gives the neonatal and surgical teams a chance to fully counsel the parents about what will happen at birth, and the possible complications, so that they are well prepared and understand how sick their baby might be. Also, congenital problems unfortunately don’t always happen in isolation – up to 40% of babies with CDH will have other anomalies, so parents are offered amniocentesis and a foetal echocardiogram.

There is currently a trial looking at a possible antenatal treatment for CDH, that involves placing a balloon in the foetal trachea. The balloon traps fluid in the lungs, increasing the pressure which is thought to be a stimulating signal for the lungs to grow. This approach is still quite controversial, so it’s not widely practiced at the moment.

CDH causes persistent pulmonary hypertension of the newborn (PPHN). The dynamic physiological changes of PPHN can be hard to keep pace with, and CDH babies are some of the most challenging cases for neonatologists to manage. Unfortunately, some don’t survive. Achieving stability is often treading a fine line between getting the ventilation strategy, inotropes, sedation, positioning just right at any given time.

If you remember nothing else about the immediate management of a newborn with CDH, remember this: leave the bag-and-mask circuit alone! ‘Bag ventilating’ these babies at birth comes at a high risk of inflating the gut, which will only serve to compress the already hypoplastic lungs, and lead to a world of trouble.

Ideally, intubation should happen straight away, in the delivery room, so that ventilation is controlled from the very beginning. A nasogastric tube should be placed at the same time, on free drainage to keep the stomach deflated. Many neonatologists will give muscle relaxant to babies at birth so that ventilation can be totally controlled.

After the immediate stabilisation of the baby, ventilation strategy focuses on using high enough ventilator pressures to achieve oxygenation (85% pre-ductal sats are OK – shunting through the duct can be tolerated as long as there is good right heart function) – but at the same time pressures must not be so high that there is pressure trauma to the lungs.  Some babies, if needing very high ventilator pressures, do better with high frequency oscillation (HFOV).

Those who continue to need very high levels of oxygen, and who have severe PPHN, will usually be started on nitric oxide (1992’s ‘molecule of the year’, I kid you not) which works by relaxing vascular smooth muscle cells and causing vasodilation in the pulmonary vessels.

Overall, ‘gentle ventilation’ is the rule – with minimal handling, and sedation (with muscle relaxant) as needed so that the baby is settled on the ventilator. In the past, it was thought that letting CO2 run low (and therefore the pH to rise) might be helpful, as it would vasodilate the pulmonary vessels. However, the very much undesirable other consequence of low CO2 – cerebral vasoconstriction – definitely outweighs any theoretical benefit to the lungs.

Fluid balance needs to be tightly controlled, and inotropes may well be needed to maintain blood pressure at a ‘high normal’ level – to make sure the right ventricle is well filled and the pulmonary artery pressure kept stable.

CDH used to be closed soon after birth, but nowadays surgeons prefer to wait until the baby has been stabilised – this might take 24 hours, or several days.

The baby should be off HFOV, off nitric oxide, and off (or weaning off) inotropes. A normal pulmonary artery pressure (measured on echocardiogram), kept up for 24-48 hours, is a clinical feature that may encourage the surgeons that it is the right time to operate. Small defects can be closed by suturing the muscles directly, larger holes may need a patch (see picture) to help cover over the area.

Babies with bad CDH have hypoplastic lungs that can behave a lot like those of ex-prems with BPD / CLD. Diuretics, home oxygen, long term steroids – these are all potentially in the game plan. Speaking of steroids, think about all the possible side effects from long term use…

And not just your average reflux. It can be at the most severe end of the spectrum, so ends up being aggressively treated to avoid nasty complications like chronic aspiration (hello, recurring chest infections) and feed aversion. Some babies might go as far as needing a Nissen’s procedure.

The double (triple?) whammy of chronic lung disease, reflux and oral aversion after spending weeks intubated, means that babies with CLD are often underweight. Having terrible lungs means you need more calories to grow properly, but reflux/ feed aversion can sometimes make this almost impossible to achieve without a lot of support (long term NG feeds, possibly even a PEG). The dietician is your friend.

Following up these babies in developmental clinic is really important. There are plenty of reasons for their development to be affected – the tricky period of stabilisation after birth and before surgery, followed by a major operation at a few days of life, and a lengthy stay on NICU.

The earlier in foetal life that herniation happens, the more severe the hypoplasia and the worse the lungs will behave.

Take control of ventilation at birth; do not use a bag-and mask circuit!

Ventilate gently; also consider that these babies have PPHN and might need HFOV or nitric oxide

Think about undiagnosed CDH in babies with unexplained tachypnoea postnatally

Have you been inspired to write something for PaediatricFOAM? Get in touch with us and join the team! Support, guidance and consultant input will be provided. 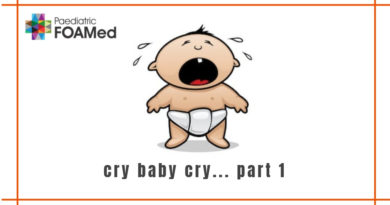 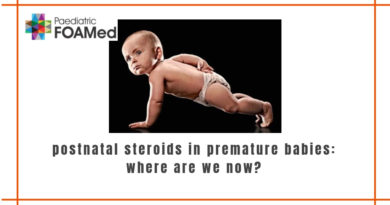 Postnatal Steroids in premature babies – where are we now? 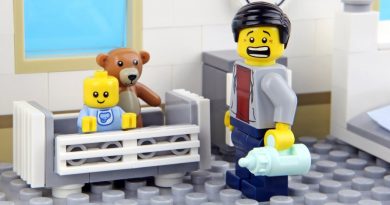 The yellow-bellied baby: Nothing to fear?