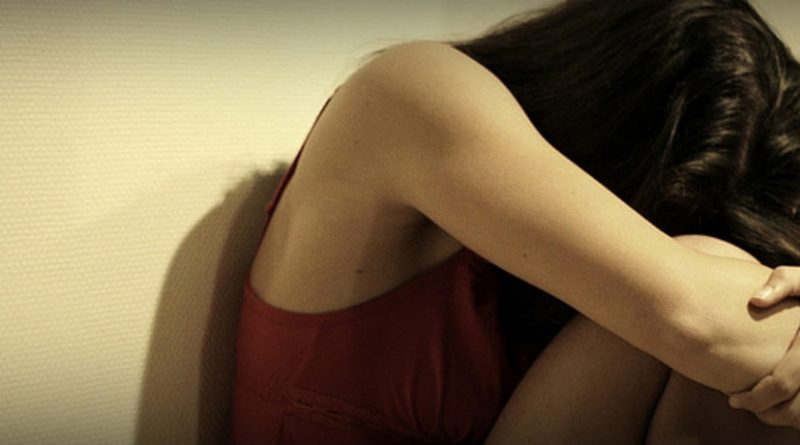 CSE occurs when a child or young adult (under the age of 18) is manipulated or pressured into taking part in sexual activity. The young person (or somebody else) receives some sort of perceived benefit – which could be in the form of food, accommodation, drink, drugs, money, gifts or affection. However, CSE always involves an imbalance of power, coercion and degrading or violent treatment, and the young person may not realise that they are being exploited.

Victims of CSE will have long term physical and mental effects from the abuse suffered, and they are at risk of death at the hands of their abusers.

Although it tends to be vulnerable children who fall victim to CSE, it is important to remember that any child from any background can be a victim. CSE is a ‘hidden’ crime; the child or young person often does not see themselves as a victim, and they usually trust the perpetrator. It is very unlikely that the victim will make a disclosure, which is why it is our duty in paediatrics to be extremely vigilant and identify those at risk.

Remember: although a young person might appear to have ‘chosen’ to become involved in an unsafe relationship, it is never a true choice as the abuser holds all the power. A young person can never consent to their own abuse.

CSE can happen in many different settings, and there are multiple ways in which a child or young person can be groomed. ‘Grooming’ is a deliberate action undertaken with the aim of befriending and establishing an emotional connection with a young person, to lower their inhibitions with the intention of carrying out sexual abuse. It is illegal.

Grooming is premeditated and carefully planned to build a relationship with the victim whilst systematically isolating them from family, friends, school and other sources of support. 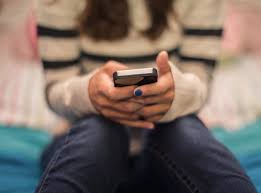 Initially, the abuser might gain control through affection and giving gifts – and once control is established this can switch to aggression, violence and blackmail. Perpetrators are often considered to be well liked, articulate and plausible people; they can be male or female, any age (including from within a peer group) and from any ethnic background.

Much concern recently has been focused on online grooming – social media plays a major role in CSE in today’s world. Victims can be coerced into posting indecent images or ‘sexting’, and these images and messages can be used as blackmail.

The different types of grooming 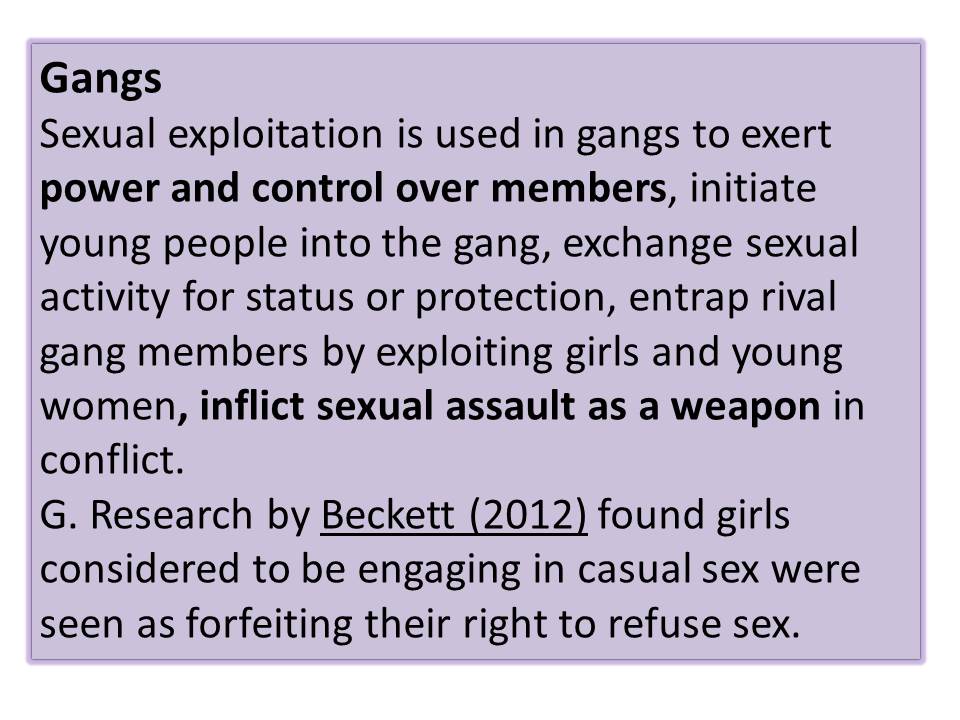 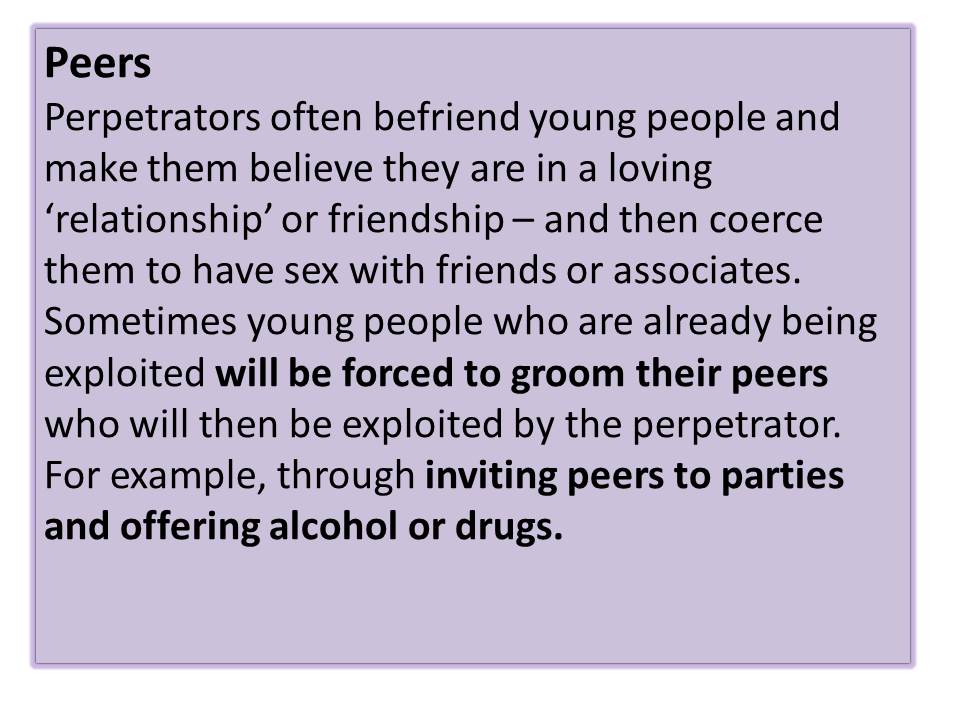 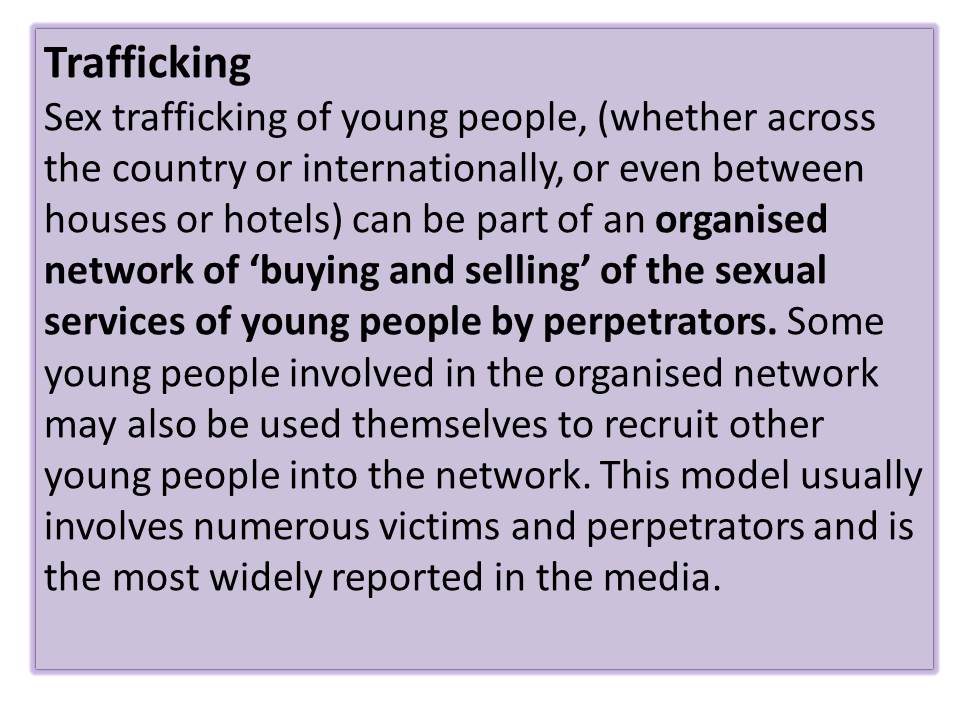 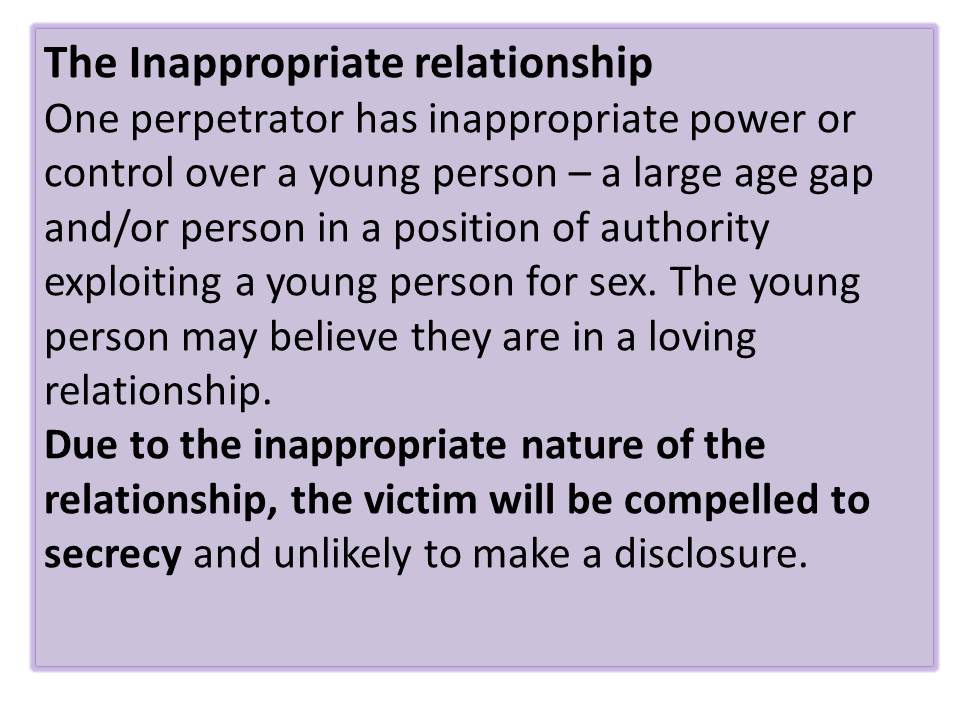 How to recognise Child Sexual Exploitation 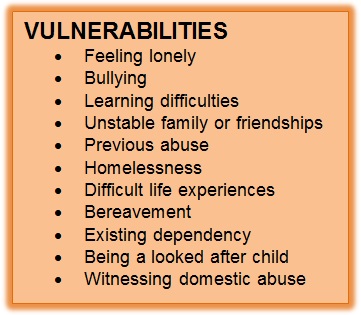 There are various behaviours and risk factors that make a young person vulnerable to CSE, and there are many signs that could suggest that a young person has fallen victim to CSE.  When considering if a young person is at risk for CSE, you need to consider their background, behavior and support networks. 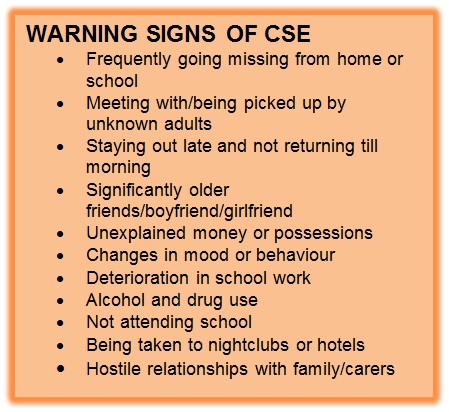 Young people who are escaping a violent, abusive home can be easy targets for abusers as they are spending a lot of time away from home. They tend to be individuals who have limited or no adult supervision, so their parents or carers do not know where they are or who they are spending their time with.   Timings and locations are something to consider when seeing young people in ED: have they presented in the early hours of the morning, or at a time when you wouldn’t expect them to be out and about? Have they mentioned they were in a nightclub or even a hotel, despite clearly not being old enough?

One way of identifying risk factors is by doing a HEADSSS assessment (a paediatric assessment tool used as an “adolescent health check” which helps to identify risk taking behaviours and mental health problems).

Self harm / self image

The HEADSSS assessment is a good way to get an overview of a young person’s lifestyle. Starting with relatively safe, ‘easy to talk about’ topics, it and builds up to the more awkward ones.

However difficult these questions might feel for you to ask, it is crucial that you do. The information will not usually be volunteered by victims – as mentioned before, these young people often do not realize they are being abused.

In the past, crimes of CSE have often happened ‘under the radar’ or been overlooked. Shockingly, victims of CSE – particularly girls – have been known to be characterized as ‘promiscuous’ or even worse, assumed to be the manipulating force in the relationship.   Society is slowly coming towards better awareness of the truth: that this is not a ‘lifestyle choice’ for any young person, and that the power the abuser holds means that the situation is inescapable for the victim unless the situation is detected and acted on by authorities in health, social care and law.  We are now thankfully much better at identifying and investigating child abuse although there is still a huge amount of work to be done – especially in the media portrayal of these abusive relationships. These vulnerable young people whom we advocate for must never be judged or stereotyped. 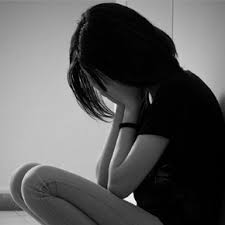 Your first port of call in these situations is to get in touch with your hospital’s named Consultant and nurse for Child Protection and Safeguarding. Document your exact concerns in detail (including direct quotes from the young person where possible) and discuss them with the safeguarding team immediately, no matter what time of day or night it is. The young person should not leave hospital until there is a plan in place and a safe place for them to go to (accompanied by a responsible adult – not the suspected abuser). If necessary, the safeguarding team will contact the local police – many police units have a dedicated team for CSE.

Child sexual abuse causes long lasting damage to the victim. This can be physical damage in the form of injuries, STDs and unwanted pregnancy; it can make it extremely difficult for the young person to form healthy relationships in the future, and it can have spiralling effects of depression, PTSD, anxiety, addiction and even suicide. We cannot afford to miss any chance to identify CSE, act and intervene.

Chelsea’s Choice is a production designed to highlight the issues of child sexual exploitation. It has been shown in schools to raise awareness of CSE amongst parents and young people, and a number of disclosures have been made after watching it.  http://www.alteregocreativesolutions.co.uk/chelseas-choice/

E-learning from the Department of Health  http://cse.brook.org.uk/story.html 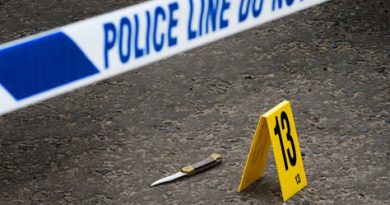 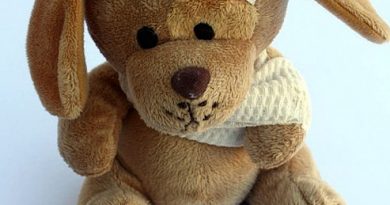 Child Protection Documentation – Where do we even start?! 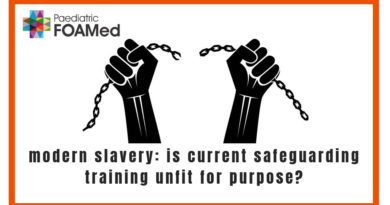